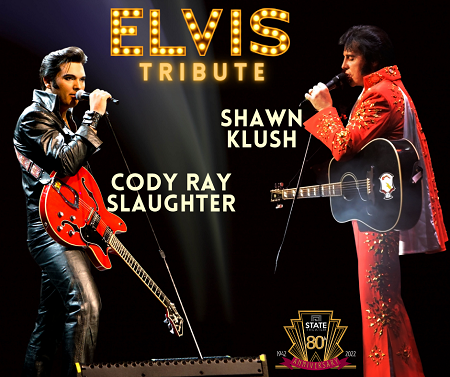 
Shawn Klush was born and raised in the small coal-mining town of Pittston, Pennsylvania, Shawn’s love for music led him to begin imitating his musical idol, Elvis Presley. He performed in the famous Poconos region followed by a tour of Canada where he entered and won the $5,000.00 prize in the “Worldwide Elvis Competition” in Montreal. This caught the attention of the award-winning Las Vegas show, “Legends in Concert” where for many years he starred as ‘Elvis’ in their Myrtle Beach, Las Vegas, Branson and Atlantic City show rooms. Each year he stars in the “Elvis Tribute Artist Spectacular Birthday Edition Tour.”, an extravaganza with Elvis’ own musicians, back-up singers, and friends, in major venues in the US and headlines the Elvis Tribute Artist World Tours.

Shawn has released 5 CDs. He has performed with Elvis’ closest friends, musicians and singers such as JD Sumner and the Stamps Quartet, The Jordanaires, The Imperials, DJ Fontana, Charlie Hodge, Jerry Scheff, The Sweet Inspirations, Joe Guercio, Jerry Schilling and Joe Esposito.

On Elvis’ 70th Birthday, Shawn became grand champion at the $25,000.00 “World Elvis Tribute Artist Competition”. He then received “The Peoples Choice Award” from Gibson Guitar Co in Nashville for “Best Concert Elvis”. Shawn was then named the “World’s Greatest Elvis” by 6.5 million international viewers on BBC1 Television in the United Kingdom. Finally, on August 16th, on the 30th anniversary of Elvis’ passing, Shawn was named the ‘First Ever’ “Ultimate Elvis Tribute Artist” by Elvis Presley Enterprises in Memphis TN. Shawn has record breaking performances in the US, Switzerland, Canada Australia, the UK and South America. He was named "Worldwide Ambassador of Elvis" at the Las Vegas Hilton where he headlines the annual the Las Vegas Elvis Fest, celebrating Elvis’ historic Las Vegas Performances.

Cody Slaughter has been tagged as one of the most talented young Actors, Singers and Recording Artists in the country. Cody began entertaining at the young age of 13. Being a true Southern boy, his passion for Elvis’ music and his uncanny resemblance to the King of Rock N roll, has directed his career path.

Representing Tupelo, Mississippi (Home of Elvis’ Birthplace) Cody was the youngest man ever to be named the ‘Ultimate Elvis Tribute Artist’ by Elvis Presley Enterprises’ in Memphis TN during Elvis Tribute Week.

Cody then took on an acting role he was born to play. That of a young Elvis Presley in the National Tour of the Tony award winning hit theatrical production ‘Million Dollar Quartet’. Cody was nominated as Best Actor in a touring musical for his role. This led Cody to pursue and continue a successful career in acting.

Cody continued to star in many other productions, such as the annual Elvis Birthday Tribute Tour honoring Elvis’ Birthday throughout the month each January. He also starred in the productions ‘Elvis 56’, Memphis Legends and Legends in Concert. Cody appeared as the featured musical guest on the Late Show with David Letterman on CBS television at the Ed Sullivan Theater in New York in front of 5 million TV viewers. Cody was the same age Elvis was when Elvis himself appeared on the very same stage on the Ed Sullivan Show. This August, Cody will again star in his own original musical about the life of Elvis entitled ‘This Man from Memphis’ that he has written and is directing himself. Cody will again present the show, by popular demand in Memphis TN.

You won't want to miss this fabulous tribute to The King!